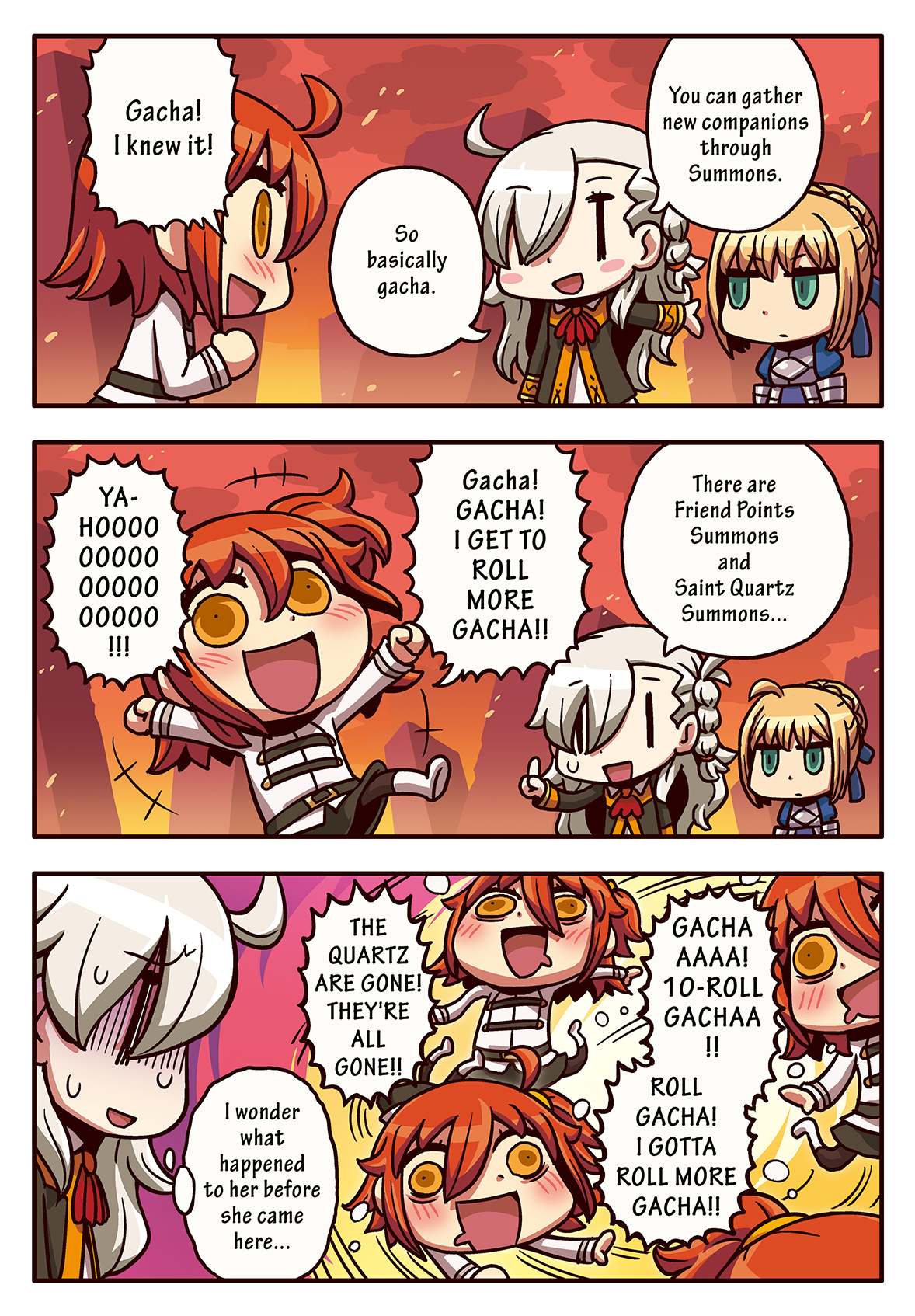 (Is this kid ok?) By the way, you can use 30 Saint Quartz to perform a 10x Summon, commonly known as 10-roll gacha, where one ★4 or above card is guaranteed. This is way more efficient than a single summon.

One ★3 or above Servant is guaranteed as well, Director.

Hello there, this is Mafia Kajita’s FGO Lesson “Even Berserkers Can Understand!” where we will talk about the game’s more complicated aspects. In episode 3, we will talk about an aspect of the game that make many Masters happy and sad at the same time, “Saint Quartz Summons.”

I will first go over the basics. In “FGO”, an item called “Saint Quartz” can be obtained through quests, login bonuses, or if you choose to, purchased with real money. You can use “Saint Quartz” to perform various functions such as performing summons, recovering your AP, continuing after a lost battle etc. However, just like many mobile games out there, this item is mainly used for Saint Quartz Summons, commonly known as gacha. 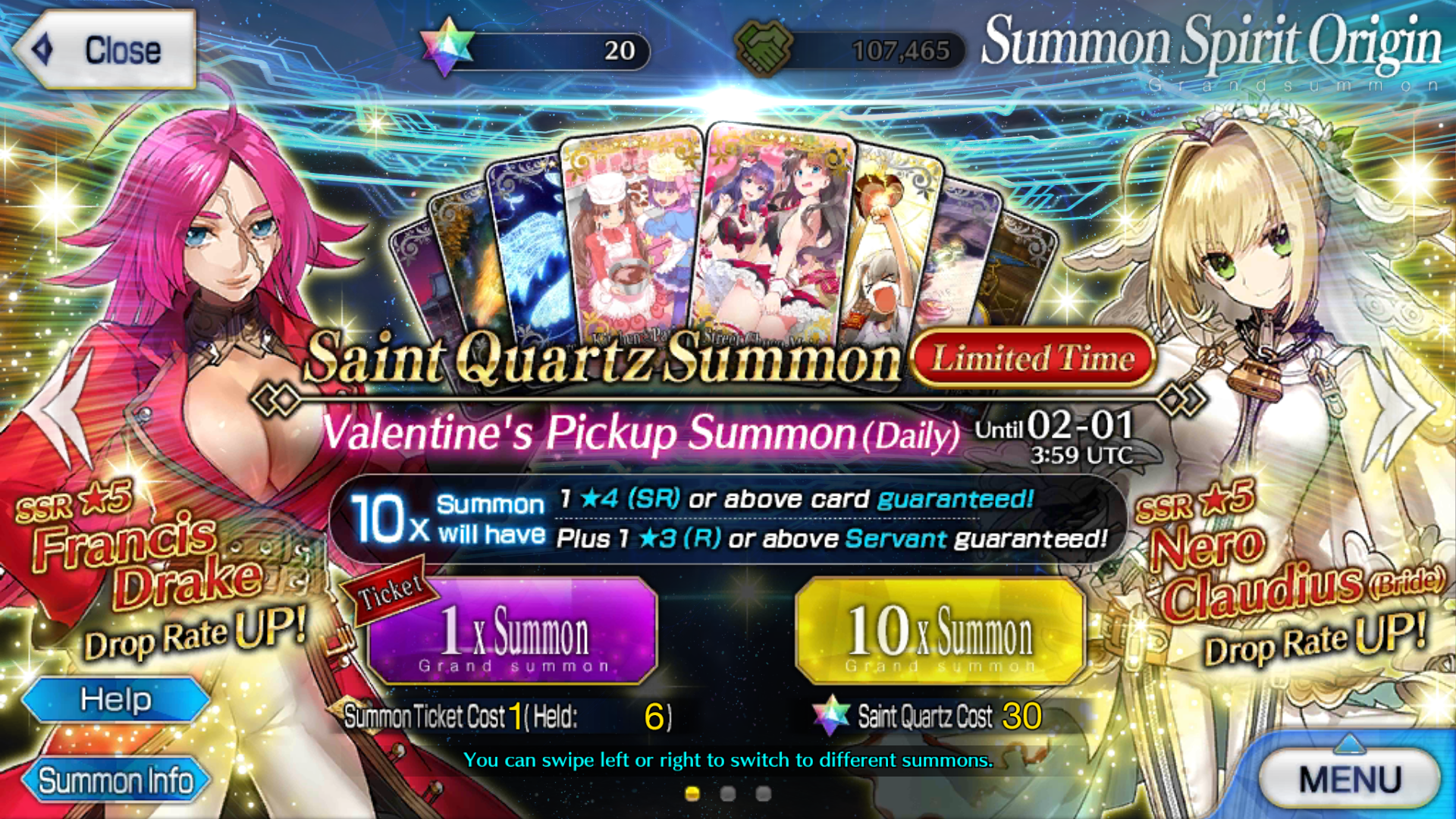 ▲Limited-Time event banners will be featured as Saint Quartz Summons from time to time. 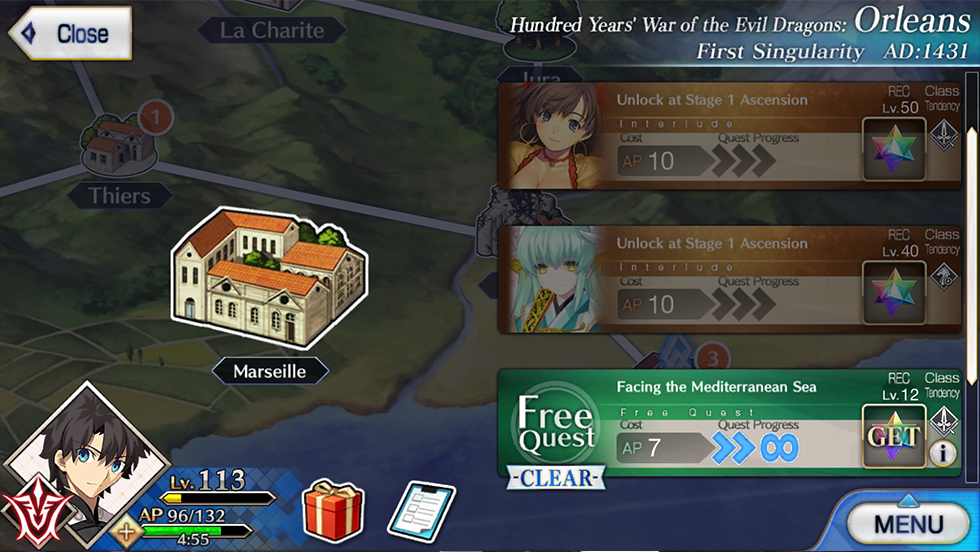 ▲You can obtain Saint Quartz by clearing Free Quests, Bond Quests, or Main Quests located in each Singularity. Some of these quests have powerful enemies so be sure to check the recommended level.

Three Saint Quartz can be used to perform one Saint Quartz Summon, you are guaranteed to receive one ★3 Servant or Craft Essence but…as the Director mentioned, a 10x Summon that uses up thirty Saint Quartz will guarantee a ★4 or above card and a ★3 or above Servant.

Back to what we talked about in episode 1, one of the main attractions of this game is loving your Servants. Therefore, it’s only natural for Masters to want to get Servants out of their gacha rolls. But we all know it’s one Craft Essence after another and that pulling Servants is hard. That’s why, it’s recommended that you slowly save up your Saint Quartz to roll a 10x Summon. Well, we do have those lucky oppressors who can pull ★5 Servants from a single ticket pull… In the end, whether your believe in single gacha or 10-roll gacha, a Servant will show up when it’s meant to be yours, so just follow what your heart tells you. By the way, it’s easier for me to summon a Servant at 2AM when my magical energy is at my peak (or so I think.) 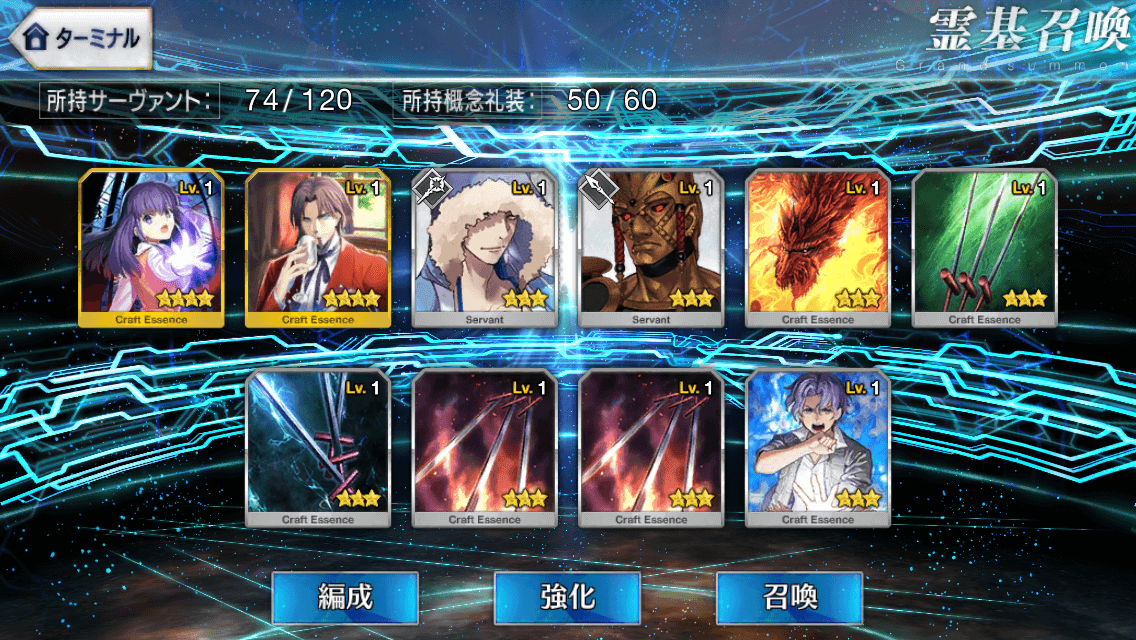 ▲I did a 10-roll as I was writing this article and…hmmm? I guess it really must be at a timeslot where my magical energy is at its peak. I mean, it’s 10AM right now!
**Mafia Kajita's actual screenshot from Fate/Grand Order (Japan)** 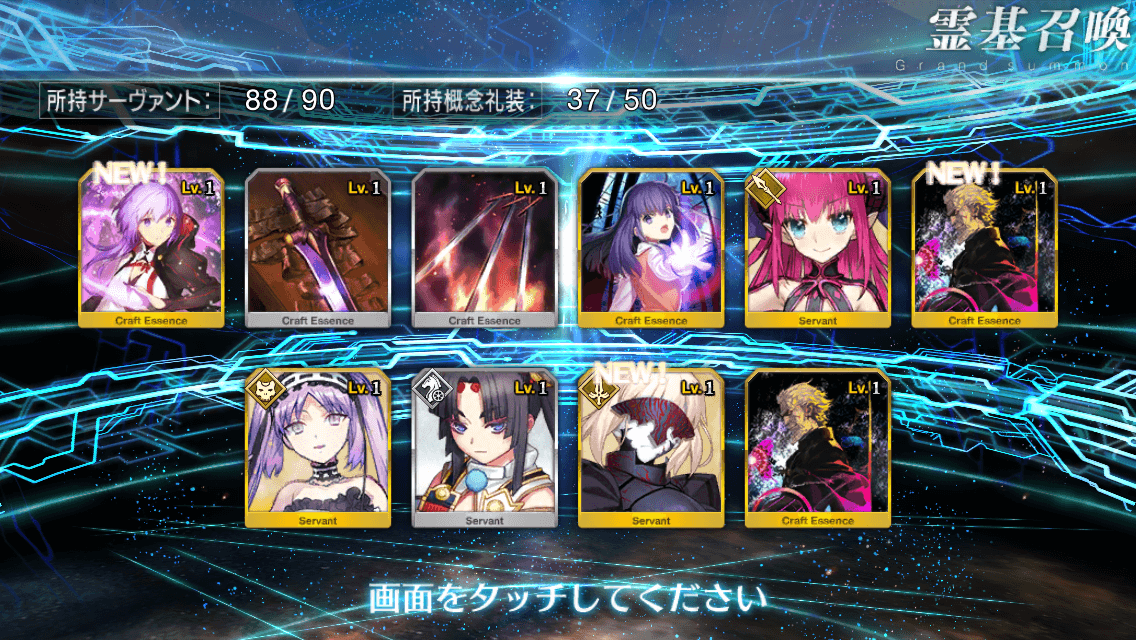 ▲They will show up when it’s meant to be. This must be one of the best rolls I’ve ever done. Just look at this picture!
**Mafia Kajita's actual screenshot from Fate/Grand Order (Japan)**

Now let’s talk about something a little sensitive. At the initial launch of Japan’s server, there wasn’t a Servant guarantee and many players met the tragic fate of rolling 10 Craft Essences. Due to such negative images being fixated about early on, many players to this day consider Craft Essences to be very undesirable… However, that’s not true at all.

It’s true that in a game like this Servants can be seen as more important than mere equipment cards, but as you spend more time with the game, I believe you too will understand the importance of Craft Essences. For example, instead of focusing on raising high rarity Servants, equipping a well-synergized Craft Essence will often produce a far better outcome in battles. Especially Craft Essences that grant NP Gauge at the beginning of the battle, which can be useful for any Servant. 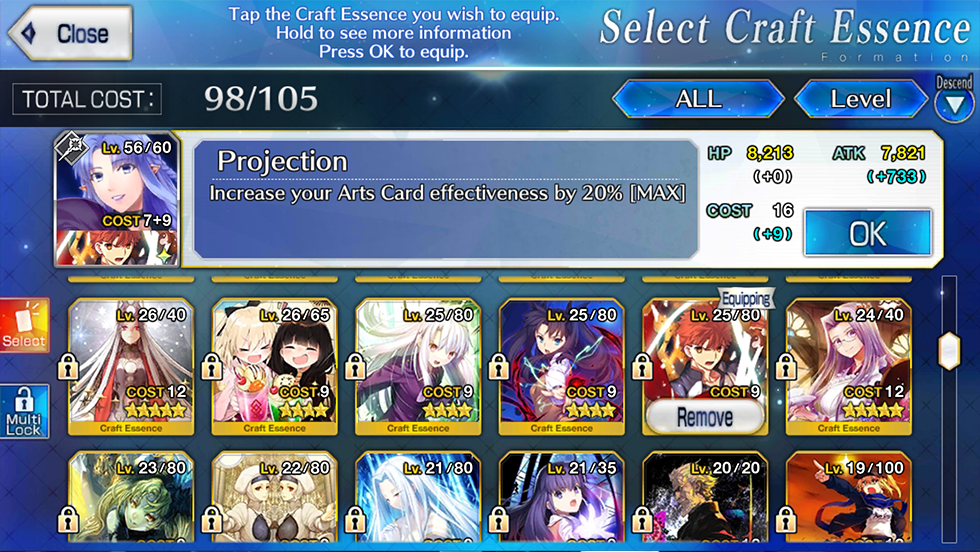 ▲By equipping “Projection” on Medea, who’s a powerful Arts Caster, you can further strengthen her capabilities in battle. By the way, if you enhance a Craft Essence with a duplicate copy, this action is called a “limit break,” and by doing so you can raise a Craft Essence’s level cap. By fully limit breaking a Craft Essence, its card effect will also be enhanced. In the case of Projection, it starts out by increasing Arts effectiveness by 15%, but if you limit break it the effect becomes 20%. 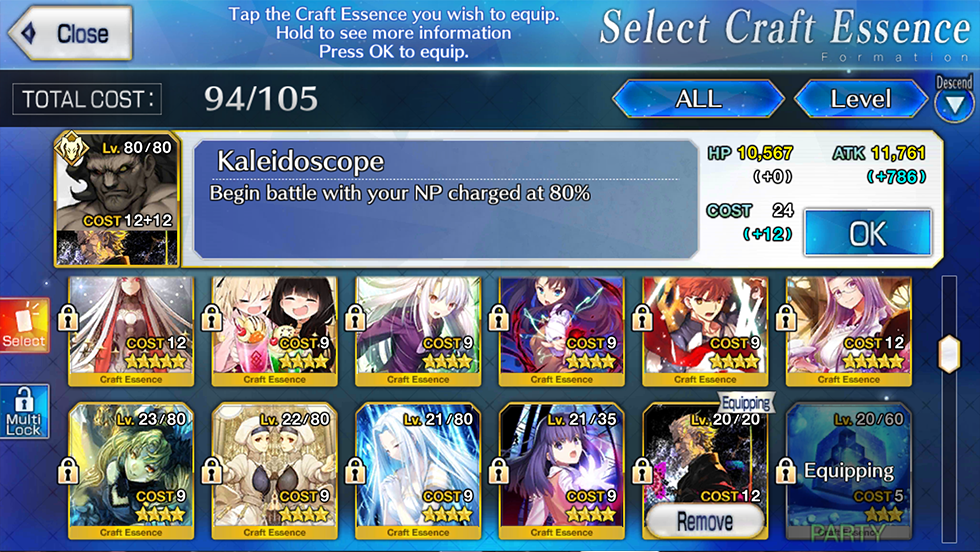 ▲Among all the Craft Essences that grant you NP at the beginning, a card that’s based on the Wizard Marshal Zelretch called “Kaleidoscope” is by far the most popular. This card can ensure Servants with bad NP efficiency like Berserkers are able to unleash their Noble Phantasms. When fully limit broken, this card grants 100% NP Gauge at the beginning of battle… In other words, you can use a Noble Phantasm on your first turn.

Well, we were going to talk about some mechanics and strategies this time, but see you again next time in “Episode 4: Connect With Your Friends!” There we will talk about the benefit of friends and Friend Point Summons. Whether you have friends or not, I am sure the information will be useful.