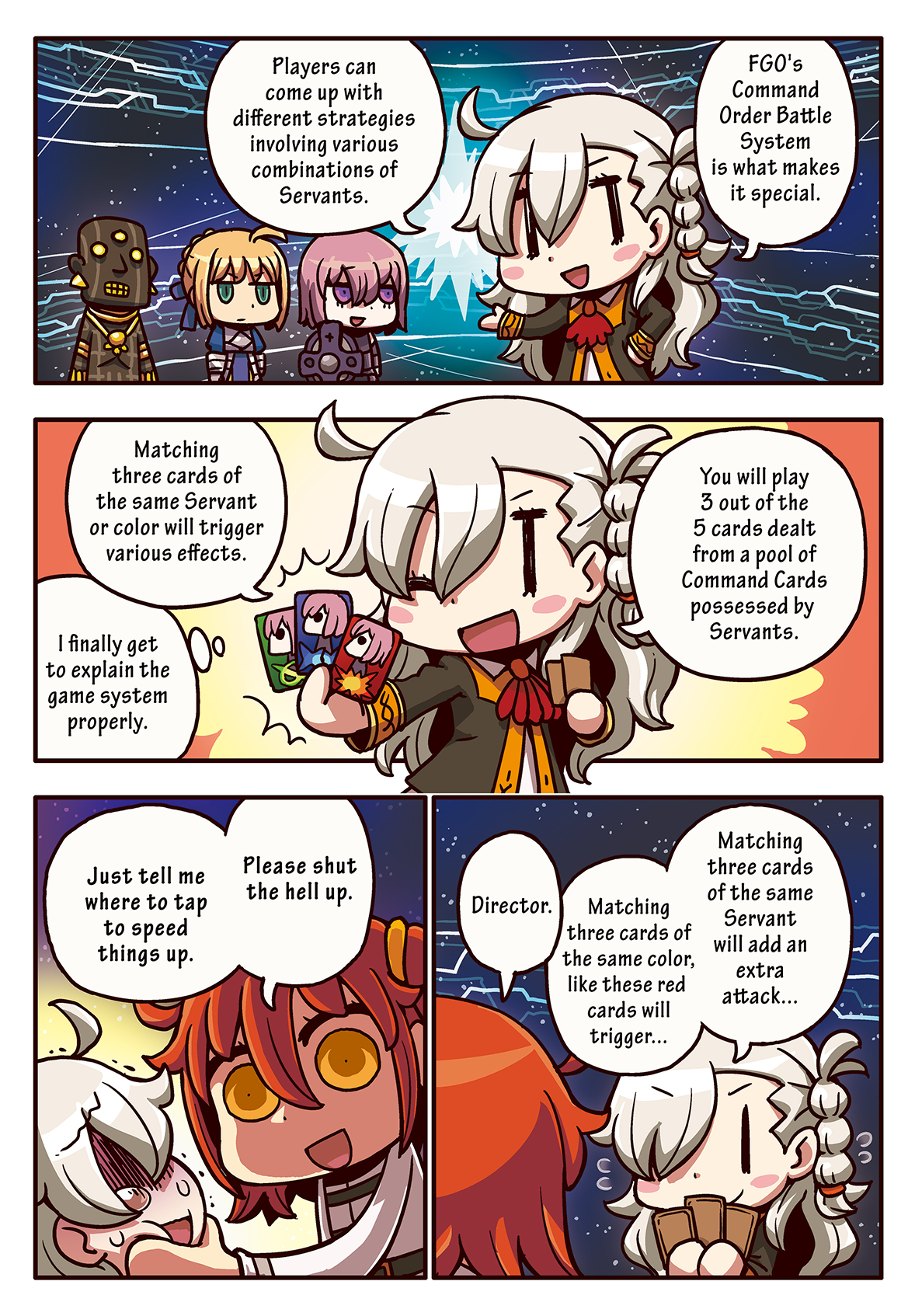 All Servants have a set of five cards that are Quick, Arts, or Buster. For example, Mash Kyrielight has one Quick, and two each of Arts and Buster cards. I guess you're well-rounded, but lack individuality.

I'm sorry Director… My cards may lack in variety, but some Servants will have three of one Command Card. Very unique, and can definitely be utilized for combat tactics.

I prefer offensive play, so I will form a party that has more Buster cards…well I ended up with an all Berserker formation instead!

Command Order Battle is more than just tapping the screen

FGO uses a turn based command battle system, in which you command your Servants using cards. There are three types of Command cards that are colored green for Quick, blue for Arts, and red for Buster. The battle proceeds as three cards are chosen out of the five for the method of attack. Choosing multiples of one color or a Servant gives you bonuses, so your selection of Command Cards is key to winning a command order battle.

▲Choosing three cards of the same Servant activates a "Brave Chain," and you gain an "Extra Attack."

▲Choosing three Quick cards will activate a "Quick Chain." As you gain more critical stars, your critical rate increases for your next set of Command Cards.

▲The "Arts Chain" is activated by choosing three Arts cards. The selected Servants will gain a fixed amount of NP Gauge.

▲Choosing three Buster cards will activate a "Buster Chain." The selected Servants will have higher attacks, and inflict more damage on the enemy.

You should be paying attention to the order of your card selection, too. Look at the plus signs at the bottom of each card, as the second and third cards have greater effects. Choose wisely for your third and most powerful card, a Buster card for more damage, an Arts card to charge NP Gauge, or a Quick card for more critical stars.

▲Each Servant has all three types of Command Cards, but how many of each type will vary. Assassins tend to have three Quick cards, Casters have three Arts cards, and Berserkers have three Buster cards, with exceptions. Keep this in mind when you're forming your parties for a greater strategy.

Now, if you are a clever Master, you may be wondering if putting an Arts card in the "First Attack" and in the third card will charge more NP Gauge, which is more efficient? The answer depends on your playstyle. If you want to charge the NP Gauge for your entire party, then put an Arts card in the first card. However, if you want to rapidly charge the NP Gauge for a single Servant, then put that Servant's Arts card last.

This battle system is one of the more complicated aspects of the game, but if you can utilize these strategies you will grow as a Master.

▲The five command cards are distributed randomly, so there may be rare instances when all three cards are from the same Servant. It's safe to assume that the bonus effect on your third card is still greater than "First Attack."

As you continue to play the game, you may notice that attacking an enemy with an HP of 0 will result in an Overkill…Actually, overkilling an enemy grants you more NP Gauge and Critical Stars so it has its merits. However, if you want to grind Daily Quests faster you might want to avoid Overkills.

In these instances, instead of choosing cards from the same Servant, anticipate when the enemy will die and insert a card from a different Servant in the middle. Once you familiarize yourself with this strategy, you can clear out weak enemies in just one turn.

▲Let's see the above example. Choosing two Brynhild cards in a row will result in an Overkill, leaving enemies still standing. By bringing Vlad in between, each Command Card will defeat one enemy body, defeating all enemies in one turn.

This was a long episode, but that is all for today. Thanks for reading until the end, you are well-suited for Mage candidacy. Those who skipped through, you are indeed a Berserker!