Episode 7 ● You should raise your Servant!
Manga by: Riyo 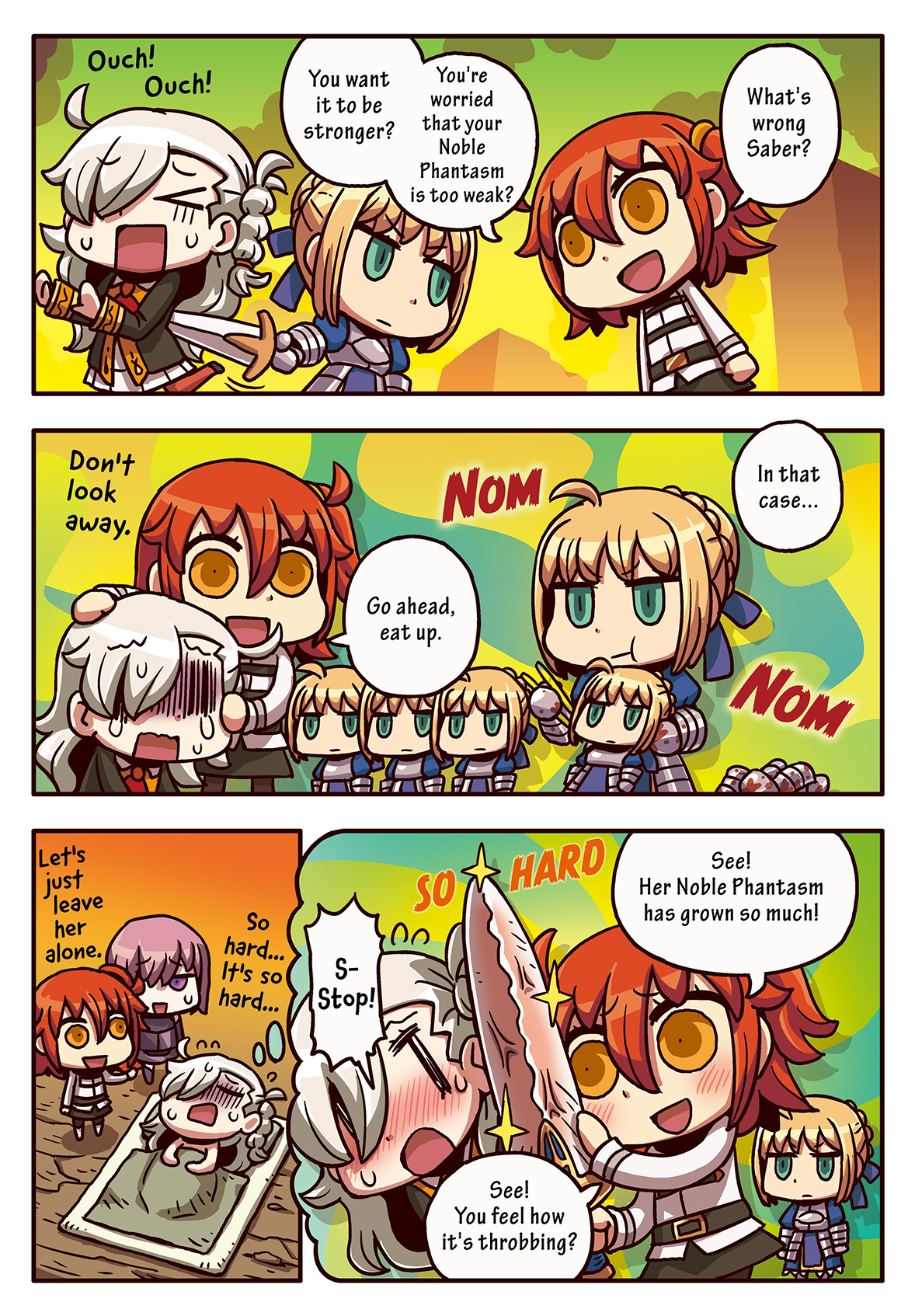 It seemed like you were having a nightmare, but did you have a sweet dream?

The beginning and ending of your sentence are contradictory! But anyways, to enhance a Servant’s Noble Phantasm, you need multiple copies of the same Servant. The level of a Noble Phantasm is maxed at five. There are other ways to raise a Servant such as leveling them up, unlocking new skills through Ascensions, and enhancing individual skills. It’s best to research how you want to raise a Servant depending on your fighting methods.

Feed your Servants with plenty of love and embers

Hello there, this is Mafia Kajita’s “Even Berserkers Can Understand!” Where we will kind of explain the game’s more complicated aspects. Episode 7 will cover something you shouldn't miss, that has everything to do with enhancing your Servants.

This game is filled with complicated mechanics that we do our best to explain from all directions both inside and outside the game, and on Twitter. Just like the game, our Servants are also different from other RPGs in that they do not gain experience levels via game play. Through the Enhancement section of the game, a Servant can be leveled up by feeding them other Servants and Experience cards. A Servant’s HP and ATK can also be increased by feeding them Hero Crystals, Sun Fous, and Star Fous. 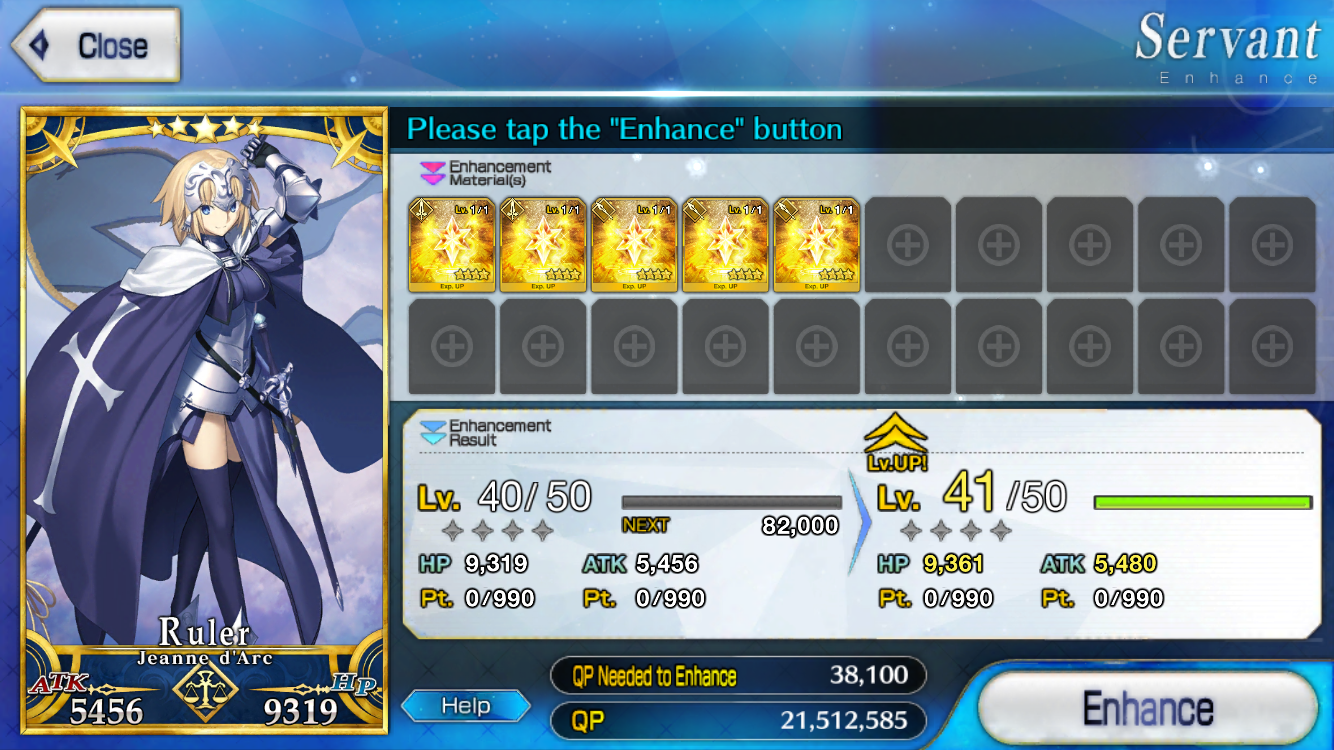 ▲This is a typical enhancement screen. You want to feed your Servant their class specific Experience cards for maximum gains. But Servants with unusual classes, such as Jeanne and Mash, do not have Experience cards that are specifically for them (*Excluding All-class Exp. cards). So they might be slightly harder to raise than others.

A Servant’s combat strength will go up as you feed them Experience cards, but enhancing skill levels and Noble Phantasms is a different matter. Gems are used to level up skills in the Skill Enhancement section, and a Servant’s Noble Phantasm is leveled up by feeding them same Servant card as the Servant that is being enhanced.

▲Charisma, Bravery, and Mana Burst are skills that will increase your damage output, which can be useful in all settings. That’s why it would be best to prioritize those skills during enhancement. 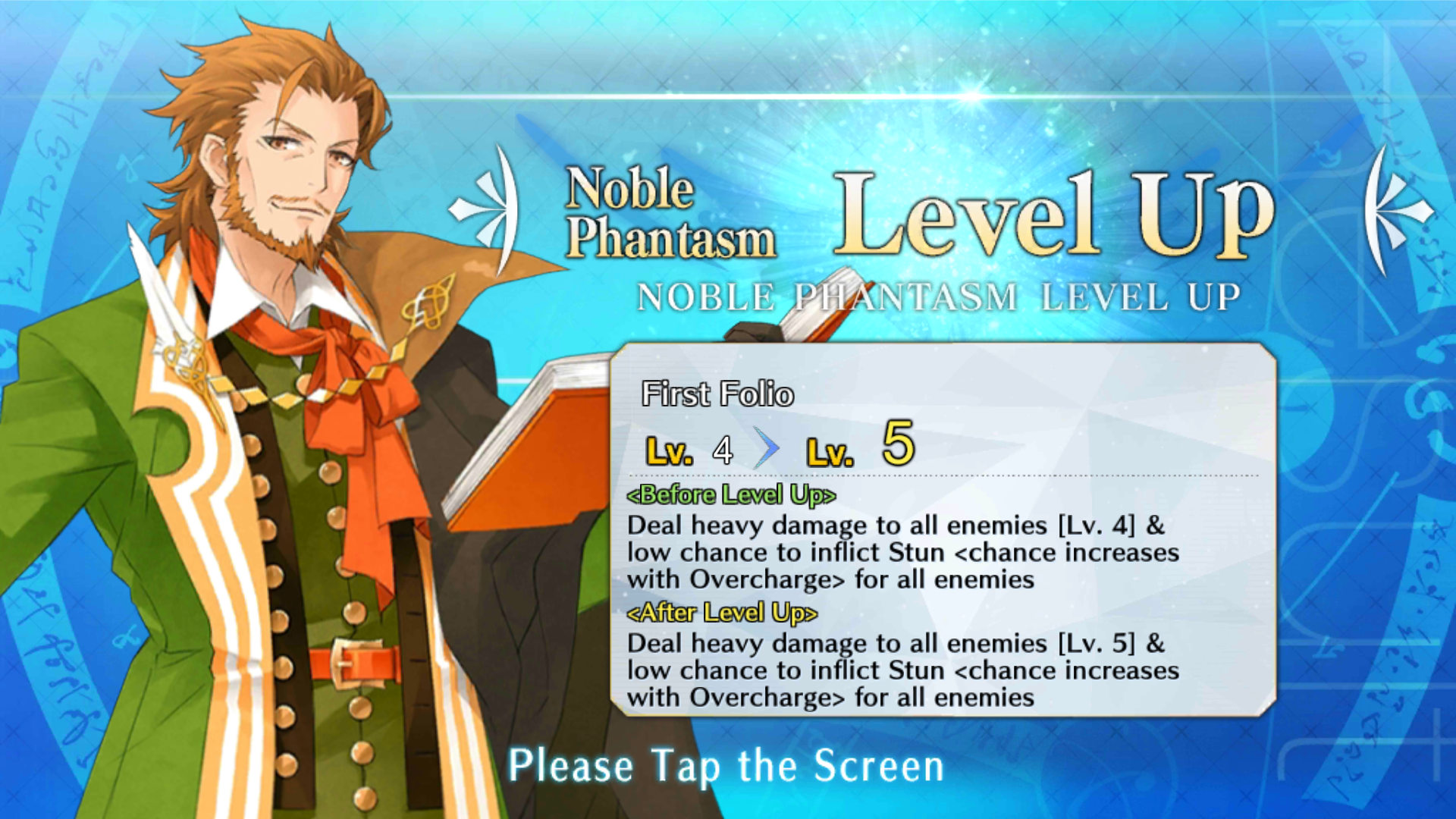 ▲The maximum level for Noble Phantasms is five. Your gacha luck comes into play if you want to maximize Noble Phantasms for ★4 and ★5 Servants. Your best bet is to summon during the Pick Up Summon periods, when your desired Servant has a higher appearance rate.

Even rarer materials are needed as you continue to enhance higher skill levels, and leveling up Noble Phantasms become more difficult depending on your Servant’s rarity. However, all skills and Noble Phantasms are significant boosts to one’s battle even at level one, so all your effort will yield great results. These skills not only enhance a Servant’s offensive strength, but also the increase the success rate of a debuff skill, and the amount of NP charged for a NP Gauge related skill. Since low rarity Servants can be summoned with Friend Point Summons, you can use that to your advantage to max-level your favorite ★1 and ★2 Servant’s Noble Phantasm. I am sure they'll be pretty useful in battle. 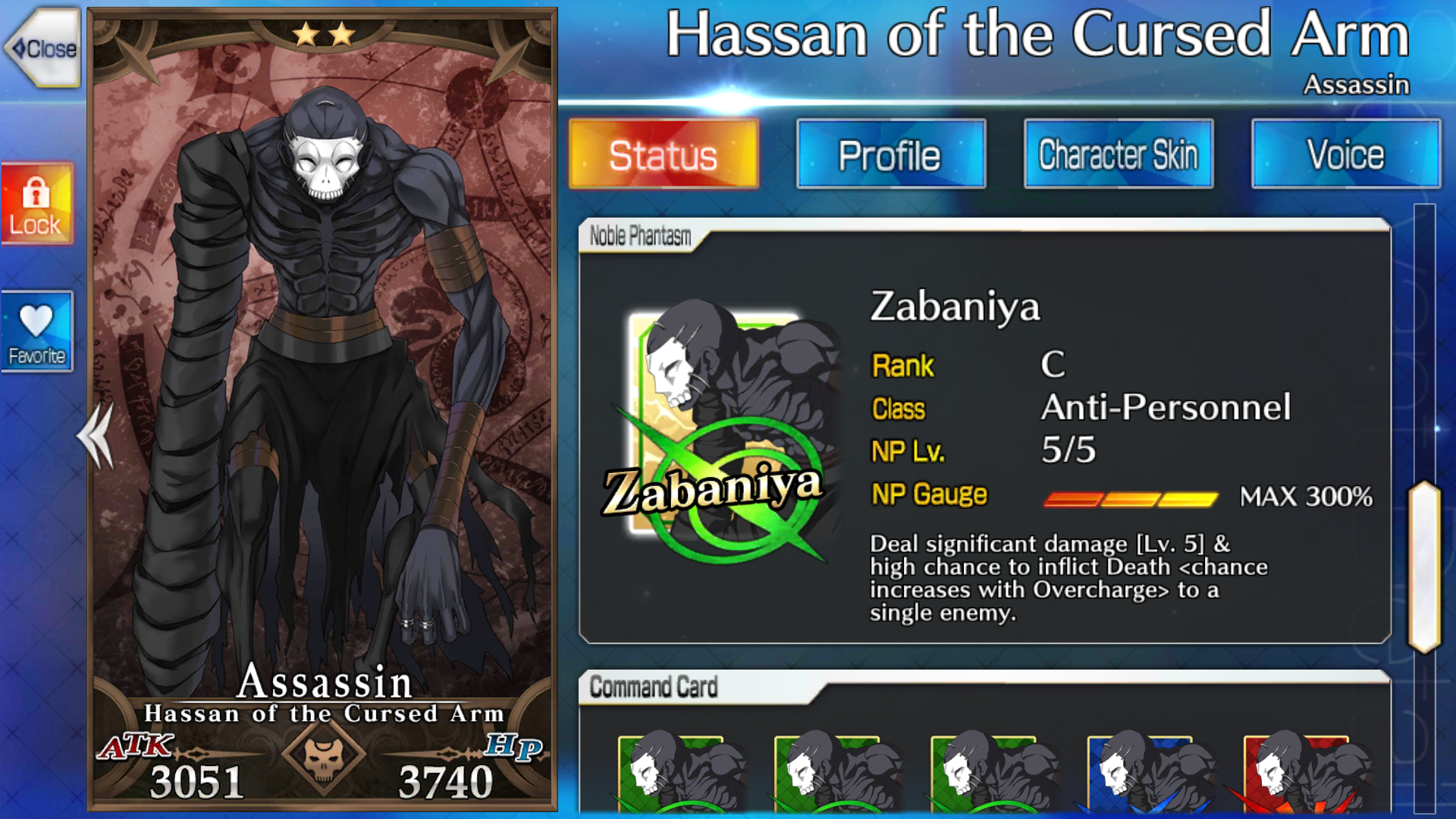 ▲Personally, I recommend ★2 Hassan. Up his NP level for a higher chance to instant kill an enemy, so getting rid of that big monster won’t just be a dream anymore. This is a technique fitting for an Assassin.

Also, don’t forget that leveling up a Servant’s NP level means that you can charge it over 100%. Your NP will have a greater effect by charging it up to 200% and 300%, and if you incorporate it into a Noble Phantasm chain, you can charge it up to 500%. It may not be easy to charge up your NP, but it’s still beneficial to understand the mechanic. One disclaimer is that if you unleash a Noble Phantasm charged up to 120% or 250%, your Noble Phantasm charge rounds down to the hundredth digit, at 100% and 200% respectively. It may feel a little wasteful, since your leftover NP charges do not roll over, and will reset to 0%.

Out of all Servant enhancements, Ascensions are the most crucial. This is only applicable for Servants that have been enhanced to their maximum level. By using materials like Pieces, Monuments, and items dropped by defeating enemies, you can raise the level cap of a Servant or in other words, “limit-break” them. On top of that, the Servants will learn new skills and their Arts will change. 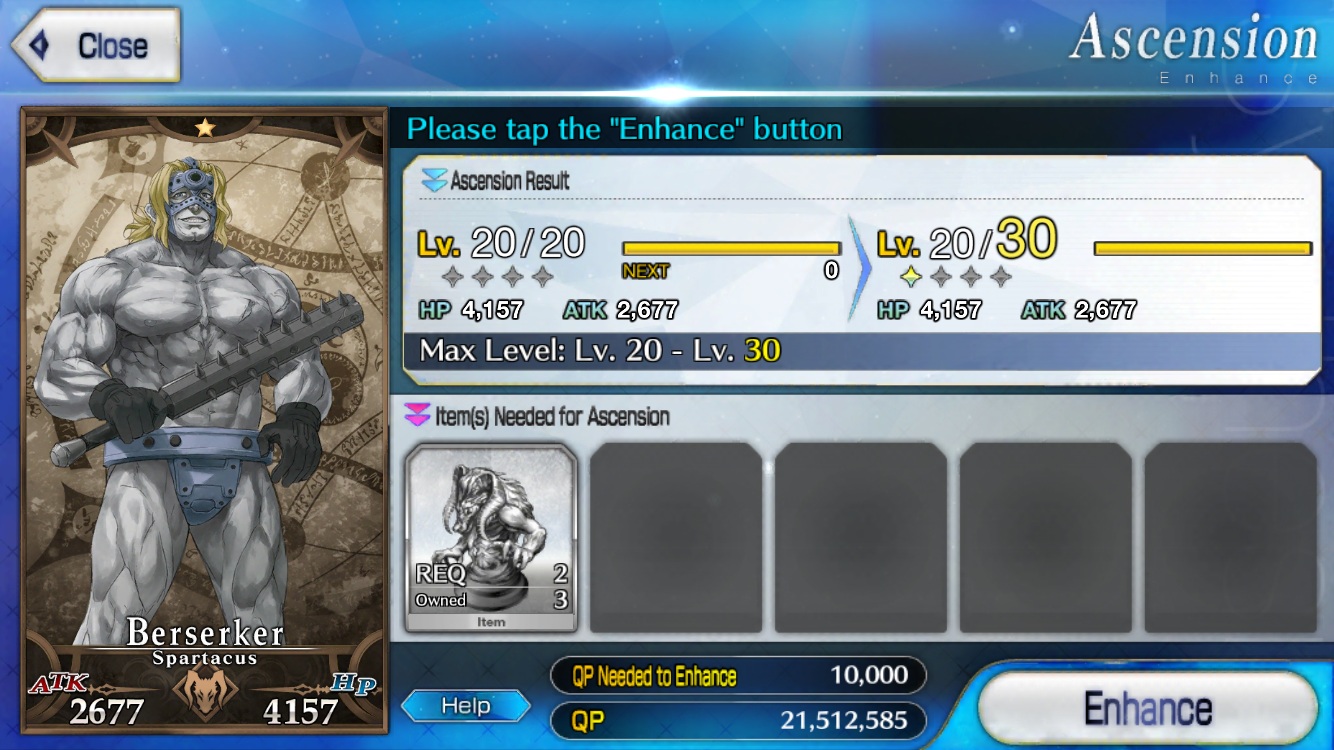 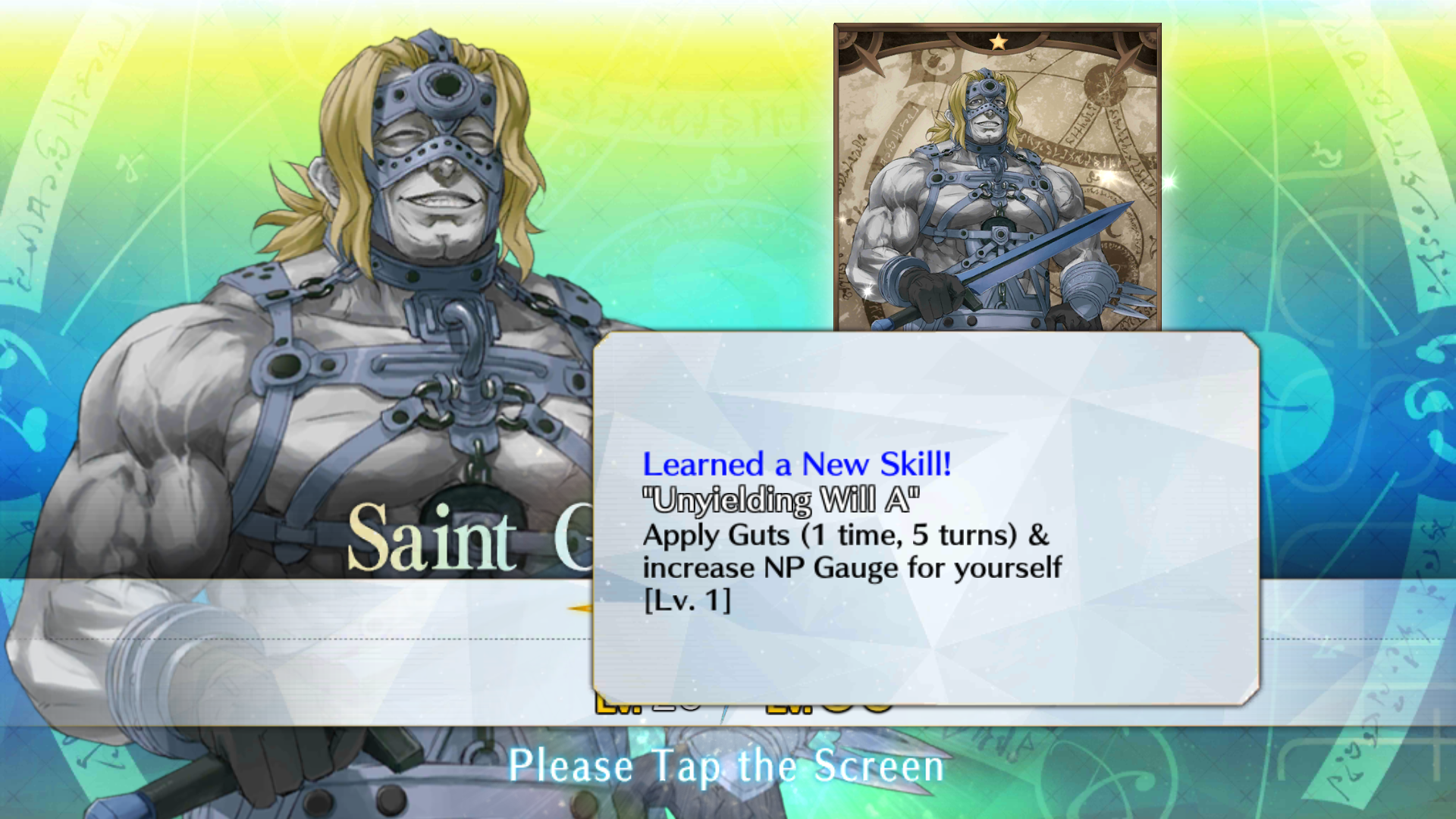 ▲Even Spartacus grins when he is ascended.

A Servant can be ascended up to four times, but the more you ascend them the more rare materials they require. These rare materials are dropped from what you may call end game content, so it’s for your own mental health to be patient and not chase after them too much. I mean, Dragon’s Reverse Scale? Monuments? That’s hell you’re walking into… 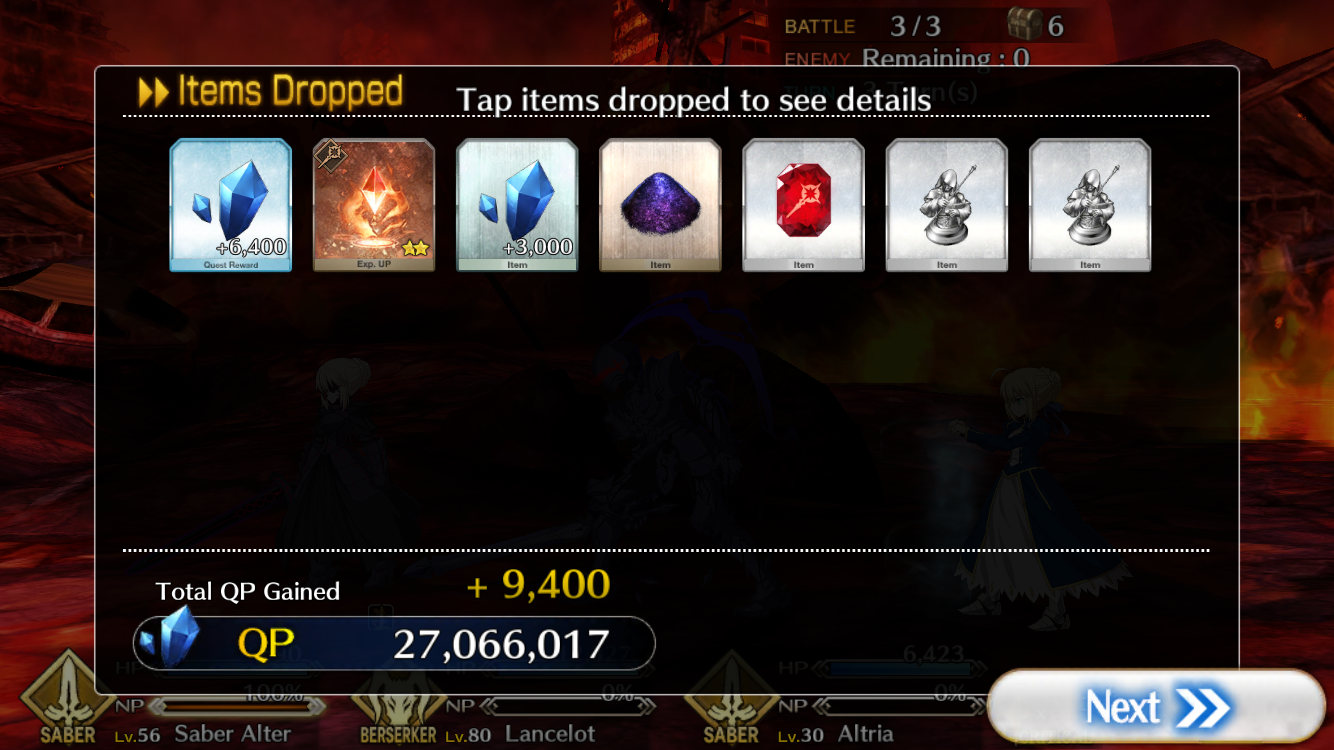 ▲I recommend Daily Quests for collecting Ascension materials. Each day features a different class so please utilize them to collect the materials you need. In addition, events tend to be full of rare materials so don’t miss out.

Finally, you should be enhancing your Servants at your own pace with care and patience, because this is the core of the game. You should be enjoying the game, rather than being worn out from trying too hard.

In the next episode, “Part 8, Effective AP Management,” we will talk about everything AP, so look forward to that.