Episode 13 ● Having Fun with the Events!
Manga by: Riyo 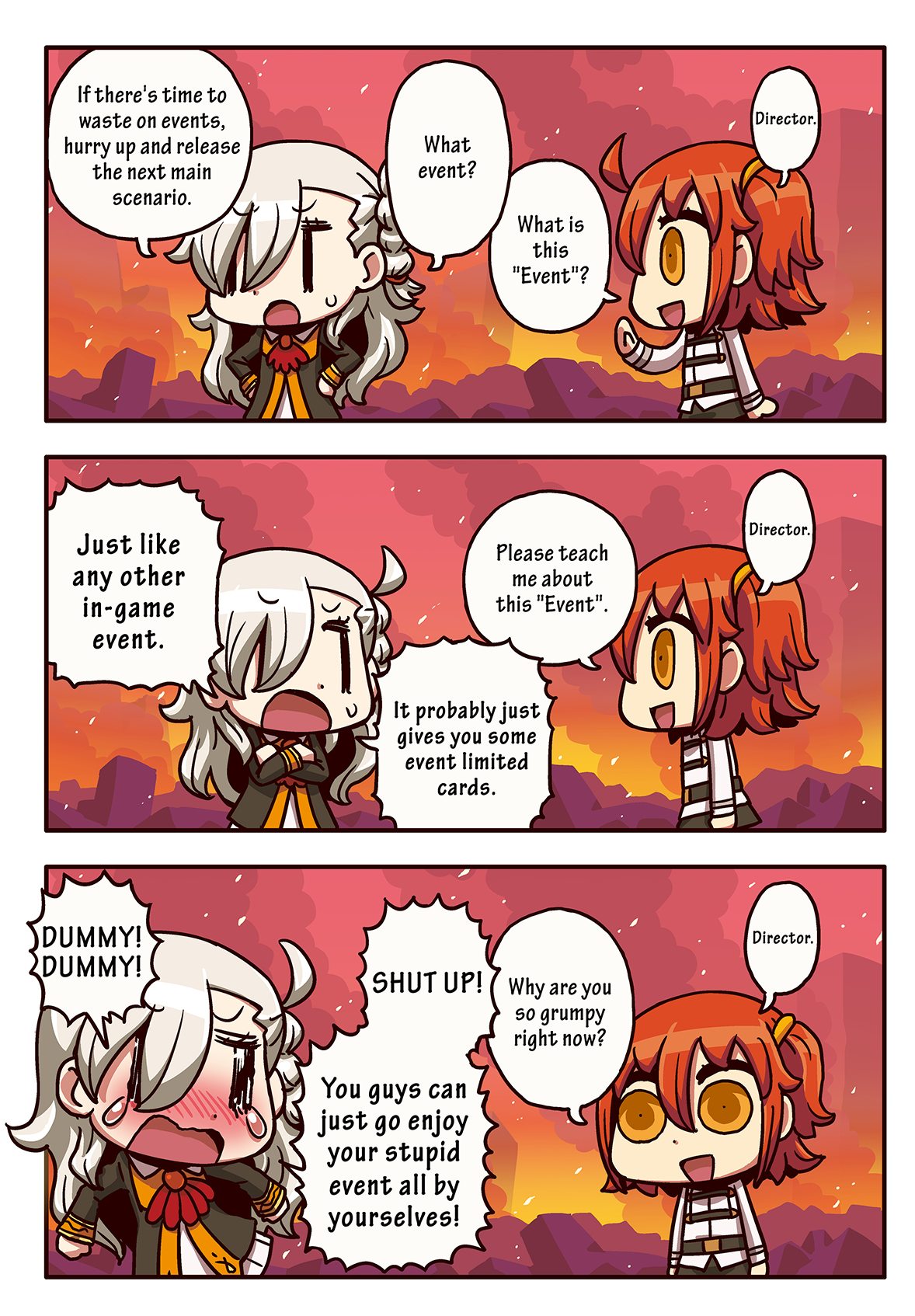 There are a wide range of events in FGO. The players had to collect dumplings to progress through the story in the Moon Goddess event, while in the Halloween event they had to collect four different types of items.

Director, I think of you whenever there’s an event… Ooh, an event item drop!

That doesn’t sound sincere! Sigh, if only I could’ve participated in an event…

Hello there, this is Mafia Kajita’s “Even Berserkers Can Understand!” Where we will kind of explain the game’s more complicated aspects. As the title indicates, Episode 13 will pick up the idols of the Servant world, the Berserker class.

Berserker-class Servants are all under “Madness Enhancement” to a certain degree, so this group is full of personalities. The line-up includes Spartacus and Asterios who are ★1, Eric Bloodaxe and Caligula who are ★2, and ★3 Servants Kiyohime, Darius III, and Lu Bu Fengxian.

My personal favorite is Spartacus, who sees his own Master as a tyrant and is the least expected to survive the Holy Grail War due to his rebelliousness, and Asterios, who gained popularity for his cuteness in the story of Chapter 3. 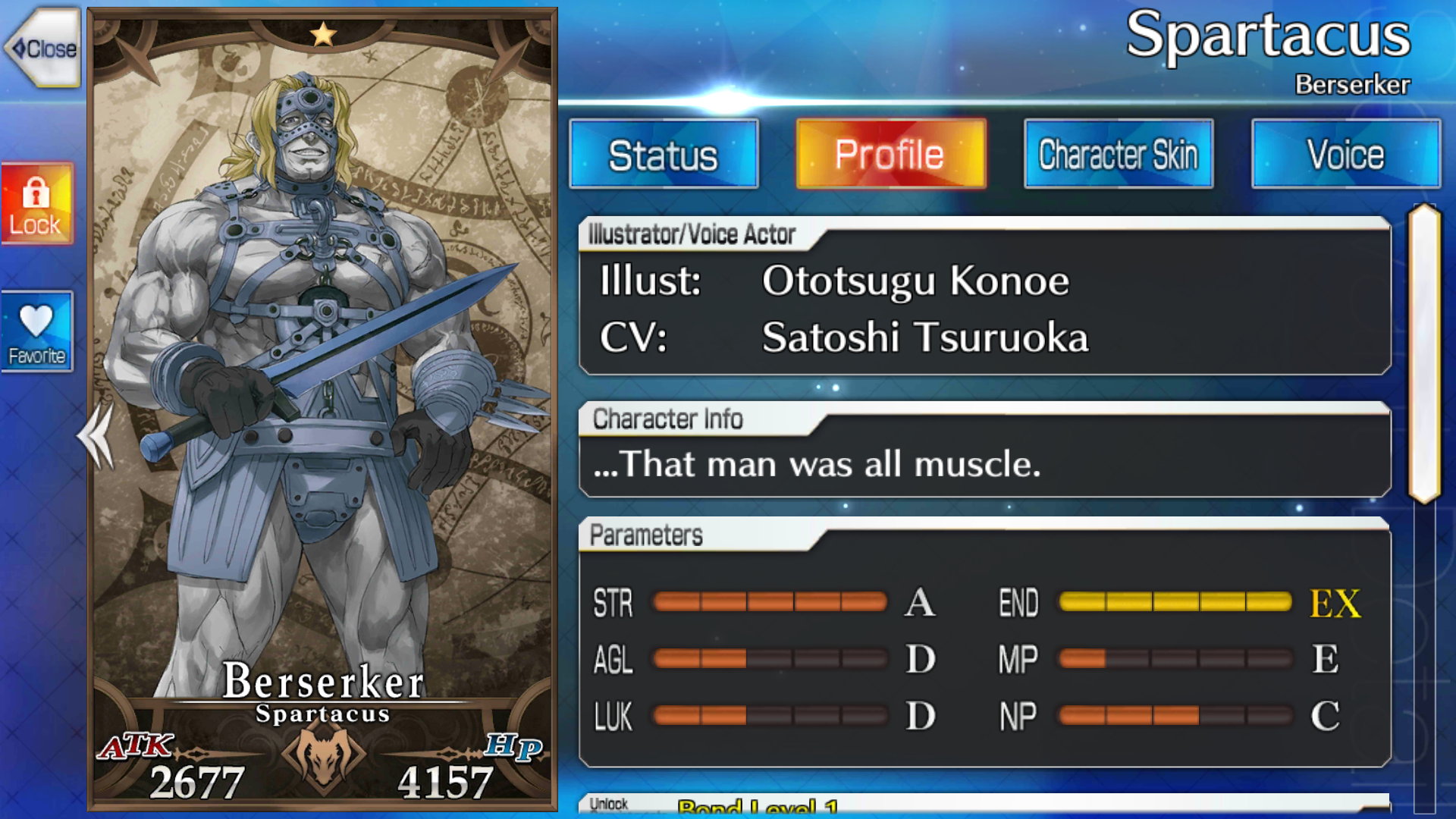 These two are strong and have great idol potential, despite their low star ranking…but their low HPs are a drawback, so I cannot recommend them to rookie Masters. Berserkers are squishy to begin with, so they are difficult to handle even for experienced Masters.

If you still want to utilize them for their strength, then you should also bring along a support Servant with Target Focus skills, similar to Teacher Georgios.

I’ve decided to pick up ★3 Servant, Kiyohime, with her solid skill-set and availability. She just suddenly appears in your Present Box without summoning her once Chapter 1 of the story is complete. She's like a slightly aggressive waifu.

Kiyohime is less squishy if she uses her Morph skill which increases her DEF, and her NP charges quickly, despite only having one Arts card. Her ATK may be lower than other Berserker-class Servants, but her Class Skill of Madness Enhancement increases her Buster Card effectiveness enough to give her a very strong offensive attack.

Her Noble Phantasm deals heavy damage, has a low chance to inflict Stun, and Burns all enemies. As mentioned earlier, we definitely recommended her for Daily Quests. By forming a Buster Chain, her damage will be as effective as a higher rarity Servant. As you may already know, Servant compatibility is key in FGO. Berserker-class Servants will come in handy, as they are strong against all classes of enemies. There’s no harm in raising a high-level Berserker Servant, so why not choose the all-rounder Kiyohime. The more love you pour into her, the more she’ll keep up with your expectations… That is as long as her Master is not a liar like Anchin.

Now, I mentioned in the previous episode that we will talk about Mash and Jeanne, but we don’t want these to become tiresome. We will make the next one the Shielder Edition and Ruler Edition. Thank you for your understanding with this change of plans. We are simply trying to accommodate our Berserker-type readers.

Anyways, please look forward to the next one. By the way, Director, the events recently are a lot of fun and we will definitely play together next time… Director… Director?